By Amie in Not So Awesome Splattery Things, Splatteriffic Reviews on October 2, 2009May 4, 2012
No comments

I really wanted to like Jennifer’s Body. Like, really, really, REALLY wanted to like it. Why? Because I think Diablo Cody is great. I loved Juno. She seems witty on Twitter. She’s fierce and independent and beautiful and clever – and she’s a woman writer making it in Hollywood. Sadly, I was as bored as the girls are in this photo…for, oh, almost the entire film.

I recognize that comedy & horror are a very hard combo – but there are a few films out there that have done it right. Jackson’s Dead Alive, Raimi’s Army of Darkness and Drag Me To Hell for example – but look, if you’re going to inject humor into a splatter-flick, you’ve either gotta cut out any seriously reflective “we used to be so close” moments, or it’s got to have A LOT of splatter. Like, ridiculous, over-the-top amounts of splatter. And you have to kill more than 3 people, ok?And it would help to cast someone who could actually act. Megan Fox’s breathy recitations and heaving breast did not make for a good performance.

I only really enjoyed the bookends of the movie, because Seyfried can actually act (and in my opinion, is also hot, even in her “homely best friend” costume) – and because they finally got to some good slaughtering at the end, sadly over the credits. Plus, the Lance Henrickson cameo thrilled me, even though he really didn’t do anything.

To put things into perspective:when Seyfried’s character Needy says “the dance will be like an all-you-can-eat buffet for her!”, I thought WELL THANK GOD. Finally! We’ll get to see tons of boys running in terror from Megan Fox’s demony self! There will be blood! SO MUCH BLOOD!!! It’ll be like Carrie with more entrails! And then…that didn’t happen.

Add in some signature Cody dialog and you’ve got a disaster on your hands. Here’s the thing – I didn’t mind the lines in Juno as much as some people did, because I felt like Ellen Page and Olivia Thrilby could pull off shit like “honest to blog”. It was like their own cute, secret teenager language (ignoring Rainn Wilson’s homeskillet nonsense, that is). But, but, BUT.

Am I to believe that teenage girls calling each other “Monistat” and “Vagisil” would actually fly? Does every joke about blood have to revolve around tampons and plugging? Is it REALLY neccesary for every single line uttered by Fox to have a witty Cody-esque punchline? “You’re so totally Green Jell-o”. Um. What? Sorry, Diablo. You lost me. I’m sure this is the kind of thing that looks HILARIOUS when it’s written down, but when it’s actually said out loud is just…fucking ridiculous – as was the completely and totally gratutious girl-on-girl makeout session. Look, I’m all for watching that kind of action, but it made absoutely no. sense.

I cry for the few wasted gallons of corn-syrup and the work of the special F/X guys on this thing. It just wasn’t worth it. 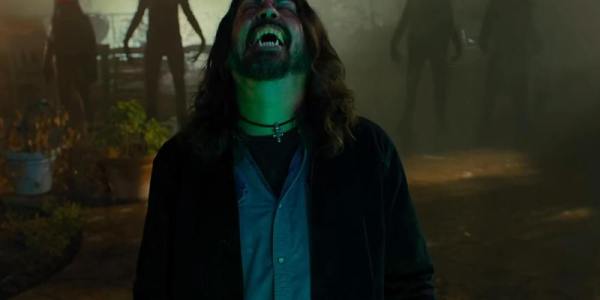