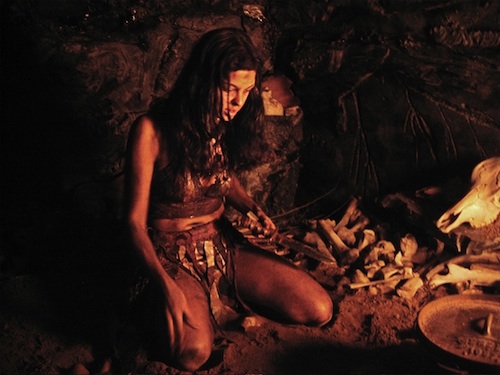 Due to a serious of very fortunate events, I got to see Lucky McKee’s The Woman – which I had been DYING to view since its Sundance controversy. Anytime you have a guy blowing up after a screening saying, “This is degradation of women, in the absolute way…I would say this film outta be confiscated, burned – there’s no value in showing this to anyone.” you have my attention.

And honestly you had my attention anyway, because I think McKee’s May is one of the best horror films ever made. The Woman is definitely NOT May – but it’s also not so horribly offensive that it should never see the light of day. It almost like that guy (and several others who complained) have never seen a horror movies in their lives.

On the surface, you see an All American family – a dad who’s providing for his wife, teenage daughter, and son by teaching them manners. Once dad discovers a wild woman in the woods (a stretch I know, but it ties into a movie called The Offpring which I guess explains how that happened) and decides to bring her home to “tame” her, you start to see beneath the layers of what goes on and realize that this family’s patriarch has created a world that is beyond messed up.

Despite the fact that “the woman” is subjected to some pretty disgusting torture, and yes, rape, I didn’t ever once feel like the message was that it was all okay. The message clearly was that it was NOT. And while the third act of the film is wayyyyy over-the-top, it at least hammers that point home. This is a film about a woman who refused to let this man get to her, and who won’t submit the way the rest of his family has.

There are some problems with over-long shots covered by music, some of the acting is pretty sub-par, and at the beginning, I wasn’t sure what McKee was doing, but if you put it altogether I think you can see it clearly. This isn’t a movie you could address with a straight view. It needed to be a little kitschy in order to make it work.

Do I think you should see it? As a horror fan, hell yeah. I hope this gets released as soon as possible, because the level of blood and gore is pretty impressive, and the special F/X kick some serious ass. As a woman, I say hell yeah too. The people who have branded this movie misogynistic and gratuitous are getting it all wrong. STAY THROUGH THE END you guys. It’s shocking, but it’s not *that* shocking.

1 comments on “The Woman”