A Wes Craven Retrospective: The Last House on The Left 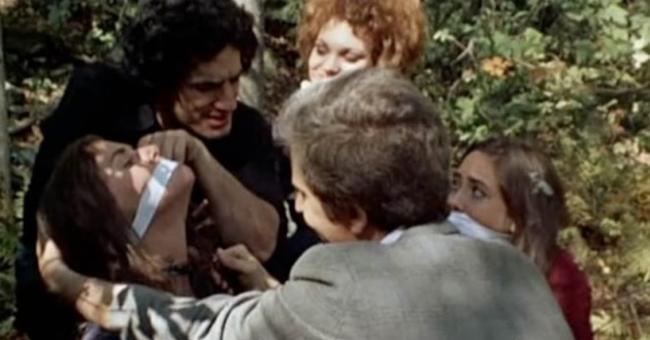 This year I thought it would be fun to focus on a few horror directors, so I’m staring with Wes Craven. I’m most familiar with his 80s films, which I saw over and over and over and over—even though I knew some of them were completely terrible. But since I’m a fan of A Nightmare on Elm Street from way back, I have seen most of his catalog.*

Starting with The Last House on the Left (1972), which I tracked down sometime in the mid-80s after I’d (FINALLY) seen Elm Street—mostly due to all the “banned” talk around it, and the promise of some pretty unbearable graphic violence.

The thing about Craven’s debut is that it’s TERRIBLY dated, and because of that, people watching it now are going to have a really hard time taking it seriously. Poor film quality, some not-so-great acting, and some really strange music choices all make it more awful than good, but it’s still entertaining if you can look past all the ridiculous 70s clothes, hair, makeup, and lingo. Ohmygod, the lingo.

SPOILERS AHEAD
Last House also takes a bit to get going—the set-up with Mari Collingwood and her family is a little lengthier than it probably should be, but it makes sense. Mari is celebrating her 17th birthday with a good friend. She’s innocent and free and beautiful, her parents love her and each other; all of this lays a foundation for the horrors that follow to be even more horrific.

Unfortunately young Ms. Mari and her friend Phyllis try to score some grass from recently escaped criminal Krug, his son Junior, girlfriend Sadie, and sidekick/knife lover Weasel. Krug and his cohorts assault Phyllis in their apartment, and then drive the girls out to the woods for some more sadistic fun. The woods happen to be right across the street from Mari’s house, where her parents wait unsuspectingly for her to come home.

And that’s what makes it even more terrifying. These girls are SO CLOSE to home and safety, but they’re outnumbered by psychopaths with weapons, and have no chance of calling out for help. This “nightmare” scenario repeats itself in a lot of Craven’s films, and Last House utilizes some pretty incompetent cops to kill any chance of rescue from happening.

One thing I noticed more this re-watch was that the villains all show remorse once their done with Mari and they realize they have to kill her. It’s extra strange to see, since they seemed to be fine with raping, beating, and stabbing Phyllis with absolutely no regrets, but Krug and company look downright wistful when they’re preparing to finish Mari off.

The twist to this film is that Mari’s parents get a chance at revenge when the criminals find themselves without a car, and stumble onto the Collingwood’s front door. Mom recognizes her daughter’s peace sign necklace, finds some bloody clothes—and once they search the woods and find their dead daughter, they plot how to take out each one of the murderers. Dad opts for some clever booby traps, and eventually a chainsaw! And mom … well, mom employs her sexuality to deliver a particularly nasty surprise (talk of that scene made the rounds of my high school for MONTHS).

By the time the incompetent police show up, mom and pop are covered in blood and have a house full of dead convicts. Oops!

The torture scenes are pretty brutal despite the merciful cut-aways (likely edits Craven had to make to even get the film released). But the scene where Krug sexually assaults Mari is definitely easier for me to watch in this version than it is in the 2009 remake, even though it’s still really hard to stomach.

So is it good? Yes and no. The script obviously has some giant holes, and even though David Hess as Krug makes a fine villain, the rest of his clan is pretty over-the-top. Both teenage girls deliver on their end, but the parents are pretty generically wooden. The popularity of this probably hinges on the “banned” label it was slapped with, and the rumors surrounding the mom’s choice of revenge.

That said; I still think it’s a must-see for genre fans, especially if you want to see how Craven has honed his art since his debut feature.

*The exceptions are: The Fireworks Woman, Stranger in Our House, Invitation to Hell, Chiller, and Night Visions.

2 comments on “A Wes Craven Retrospective: The Last House on The Left”