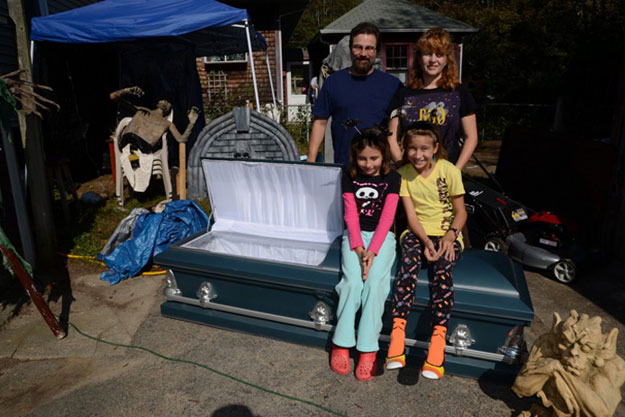 The American Scream is one of those amazingly awesome documentaries full of people that make you cry because they are so damn passionate about what they’re doing.

And in this case, what they’re doing is setting up “Home Haunts”, which means running full-scale haunted houses every Halloween that they put together themselves, and pay for with their own money. (I swear, if we ever got trick-or-treaters at our house, and our yard was bigger than a walk-in closet, I’d be doing the same thing!)

Directed by Michael Paul Stephenson (who played the kid in Troll 2, and directedBest Worst Movie), this intensely personal doc follows three families in Fairhaven, MA who put on complicated haunted houses every year: Victor Bariteau, Manny Souza, and Matt & Rick Broudeur work all year long to make sure the neighborhood kids have a good time on All Hallows’ Eve.

While all the subjects are interesting, compassionate, and just plain awesome people—The Bariteaus naturally end up front and center because of Victor’s intense passion. It’s clear he’s honed his talents to a level that should earn him a place constructing special F/X for horror films. You are seriously rooting for this guy to succeed, and find a full-time job doing what he loves. Even more endearing: seeing how much his wife and family love and support him. (so many things in my eyes!)

My favorite thing about the Bariteaus was daughter Tina, who shares her dad’s obsession with Halloween and spends her time dismembering dolls and covering them in blood-red paint. At one point when Tina is describing a scene she’d like in the haunted house, Victor turns to her with absolute glee and says, “You are a sick little girl! You know that?”

Also, I learned something from The American Scream that I had no knowledge of before: there are actually home haunting conventions. I mean, of course I knew that there were people who build these elaborate haunted houses in their backyards every year, but I didn’t realize there was an actual convention for them to go to learn how to build stuff and buy props! HOW COOL IS THAT!?!?!

Watching each family put together their haunted constructions, and talk about why they love doing it, and why they love Halloween is beautiful, inspiring, and just plain fun. I highly recommend you head to The Grand Illusion to see this one.

Its Best Documentary Award from Fantastic Fest this year was well earned – so if it’s playing anywhere near you, I recommend you see it. It is scheduled to air on “Chiller TV” October 28 – check your local cable listings to see if you have that channel and set your DVR!

Side note: I plan to show this to my boyfriend, so he understands that although my Halloween obsession is kind of insane, it could always be worse …