By Amie in Splatteriffic Reviews on April 19, 2013
No comments 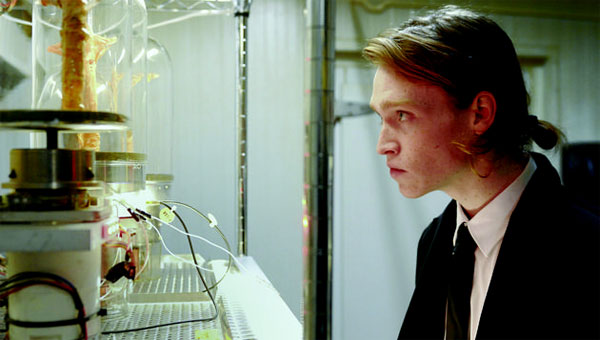 Antiviral is about an evolution in the way people view celebrity. Placed in a future bathed in clean white settings, the film centers on Syd, a salesman at a popular clinic, where the commodity is live infections taken from celebs. A celeb gets sick with whatever—herpes, the flu, etc.—and sells their virus to the clinic for a price, who in turn sells it back to super fans who want to be as close to the celeb as possible.

Gross, right? Imagine paying to be injected with Kim Kardashian’s … whatever. Anyway, things get even more complicated, as it turns out Syd works with a friend who runs a “celebrity meat” butcher shop (cells from celebs are used to grow “steaks” that fans can buy and eat) that’s also a black market business for the viruses. And when Syd steals a deadly virus from a beautiful young star, it turns out he’s interfering with a much larger plan.

It’s not covered in blood and gore and the horror is more subtle and cerebral  but given the stark white backgrounds, you can imagine that when the blood happens — it like, HAPPENS. In a big way. And that last shot. Oh man. SO UNCOMFORTABLE!