Storm of the Century 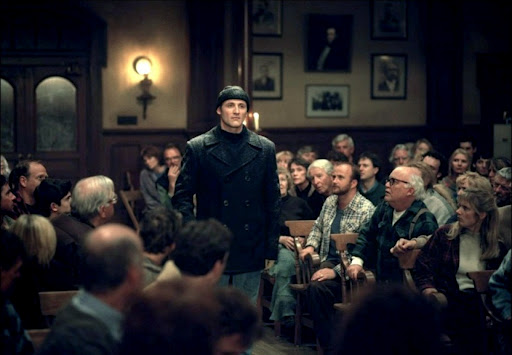 Okay, so this is actually a horror mini-series, not a film, but I wanted to share with you people how awesome it is, because it’s hard to sell Stephen King movies. With a few exceptions (Kubrick’s The Shining and the original 1976 Carrie are the best), most SK-based horror films are totally laughable, especially the ones he adapts or writes (re: The 1997 Shining remake—gahhhh).

Storm of the Century is an original 1999 TV mini-series written by King, and it’s actually REALLY good. Like, surprisingly so. Sure, it’s a little long, I mean, anything clocking in at 240 minutes is bound to be, but it keeps a pretty good pace. And it absoultey has those signature Stephen King-ridiculous moments, like kids flying around holding hands in a dream, but eh-I’ll forgive a lot when there’s lot of blood and the ending is as good as this one.

What makes SotC so frightening is the villain, Andre Linoge (a steely-gazed Colm Feore).  He arrives in the small town of Little Tall Island at the exact same time as a HUGE snowstorm, and doesn’t wait anytime with the murderin’. He starts off by bludgeoning a helpless old lady to death, and then lets waits for the town police to arrest him while having tea in front of her blood-splattered television.

From his cell, Linoge continually says; “Give me what I want, and I’ll go away”…but of course it takes him forever and day to tell the townspeople what that is, and until he does, he makes them commit suicide and try to kill each other by turning their secrets against them.

No one knows who or what Linoge is, or where he came from (the research into his backround is another kind-of-lame-but-predictable King moment)—but one thing is clear; this is a villain that can’t be killed, and he’s also totally omnipresent. The townspeople can’t stop him, so they have to give him what he wants, because if they don’t, they’ll ALL die.

I don’t want to give anything away, because if you make it through the whole four hours, you should be a little surprised, but what he wants is pretty terrible. And the way it ends up is appropriately awesome (in horror movie terms).

There’s a tiny epilogue that kind of blows, but it’s not as bad as the usual SK nonsense, so it doesn’t ruin anything. As for the kills themselves, most are pretty bloody, and more disturbing than you’d expect for a made-for-TV film.

If you’ve got time to kill, this is a great one to curl up with on a rainy day.

1 comments on “Storm of the Century”