Continuing with my Italian horror theme – Demoni And Demoni 2 are two more films I was obsessed with in my teen years. Shortly after discovering Argento, I did some research (which in those pre-internet days meant visiting a lot of video stores and talking to people FACE TO FACE. Shocking, I know) that he produced both of these Lamberto Bava-directed films. They still suffer from bad dubbing and seriously dated settings, but the Demon makeup is awesome enough that you honestly won’t care.

Demoni (Demons) was filmed in 1985 and takes place almost entirely in a theater. After one of the theater goers accidentally scratches her face on a creepy mask in the lobby, she becomes a demon that bites her friend, who also turns into a demon, and so and so on and so on. The Demons in this movie – and the sequel – operate much like Zombies. Puss-filled, falling apart, pointy-teethed zombies.

What I think is pretty cool about this one is that even though it’s one location, there are enough surprises and gory attacks that you’re distracted enough not to get bored. I still think the transformation where the chick busts right through the movie screen looks really awesome. Plus, the soundtrack is full of songs by Billy Idol, Motley Cure, Rick Springfield, and Go West. RADICAL.

Demoni 2 (Demons 2) was filmed in 1986 and takes place in a fancy high-rise building called “The Tower”. This one doesn’t make one damn bit of sense, but you gotta roll with it for the pay-offs (of which there are many). There’s a film-within-a-film thing happening here, wherein a bunch of teens are exploring the ruins of the theater from the first film and wake up one of the demon corpses they stumble over. Sally, who’s having her 16th birthday party, has an emotional breakdown after learning that her punk ex-boyfriend is on the way over, and retreats to her room to pout and watch the teens on her TV.

Wait. What? It turns out several people in the high rise (including Asia Argento in one of her first film roles) are watching this group on film, even though there doesn’t seem to be a guy with a camera filming them, but uh, whatever. Sally happens to be watching at the unfortunate resurrection moment, so she becomes possessed by the demon, and then starts slaughtering party-goers left and right – who turn into more Demons and start terrorizing and infecting everyone in the complex, including a pregnant woman, a band of bodybuilders and aerobicizers (!!?), and a high class hooker.

If this sounds over-the-top crazy, it is. They even turn a child into a demon, which morphs into the stupidest looking puppet ever. But even with its flaws, this one is totally (laughably) great. AND the soundtrack is more new wave: featuring The Smiths, The Cult, Dead Can Dance, and Art of Noise. Oh….right. That’s why I loved this movie so much in the 80s!

These are both filled with so many ridiculous moments that I’d definitely recommended settling in with a group of friends and some booze for a marathon with lots of commentary…but hold off on any food. The demony goodness includes enough puss and blackish vomit to kill pretty much anyone’s appetite.

Yesssss! I’m teaching an online class for @siffnews next month, talking about Thomasin in THE WITCH, Dani in MIDSOMMAR, and smashing the patriarchy! Join me June 22! Link to tix in bio; sliding scale options. 🌸 🐐 👑 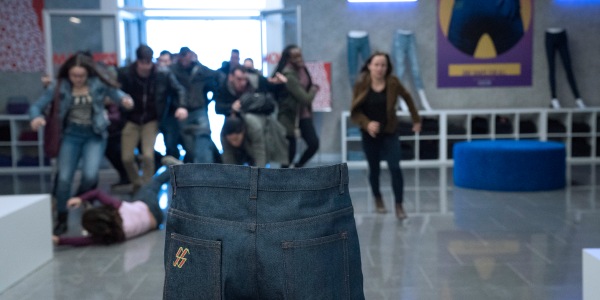