By Amie in 31 Horror Movies in 31 Days, Awesome Splattery Things, Splatteriffic Reviews on October 8, 2013
No comments

Firestarter (1984) is one of those Stephen King adaptations that was constantly playing on television, so saw it about 100x during my pre-teen years (I think my parents didn’t consider it a scary horror film because it’s not a slasher flick, so it escaped being part of the “not until you’re 13” rule they imposed).

And while the film does scare me, it’s not Charlie — so brilliantly played by a tiny Drew Barrymore — and her pyrokinetic powers that I’m afraid of. Nope! It’s the government that’s after Charlie and her father that I’m afraid of! Specifically “The Shop” that caused Charlie’s parents and her to have their powers, run by a steely Captain (Martin Sheen) who’s only interest is using Charlie as a weapon, and even more specifically, one-eyed John Rainbird (Geroge C. Scott), who becomes obsessed with Charlie and somehow thinks he can absorb her power.

After Andy McGee (David Keith) arrives home to find his pretty wife dead (Oh, Heather Locklear! You and your amazing hairdo barely get any screen time in this movie), he grabs his daughter Charlie and the two are off and on the run from government agents. Aided by Andy’s ability to “push” people to get the things they need, they run into some minor trouble when it becomes clear that Charlie has trouble controlling her pyro powers — especially when she’s mad. Of course, eventually the government agents catch up and capture them, and that’s when we meet John Rainbird. *shiver* 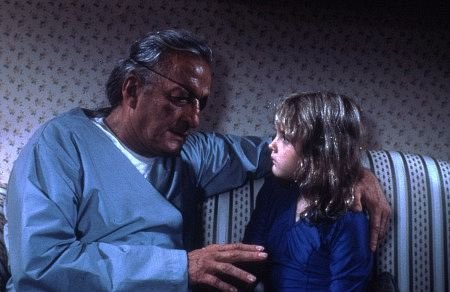 Rainbird feigns a friendship with Charlie by pretending to be a maintenance man, and creepily ply her with kind words. I say creepily, because you definitely get the distinct feeling that he’s interested in more than just stealing her powers. YICK. Scott is fucking excellent in this role, and I can’t ever see a photo of that guy without thinking of him saying “I love you, Charlie!” in this movie and then immediately getting the heebie-jeebies. He ends up fooling her for most of the film, right up until her dad tries to break her out and things go wildly awry.

Sure, watching Barrymore work up to the torching is kind of hilarious, but the defiant way in which she decides she’s not taking anymore of The Shop’s shit is AWESOME. (“That’s NOT my fault!”). Also,  the fireball special F/X are still boss, even now, and watching Charlie slaughter all the dudes who have been aiming guns at her and her father for the entire movie is really satisfying.

Final recommendation: HELL YES. This one’s a keeper — a great addition to any horror movie collection, and something you can watch again and again and still be entertained.