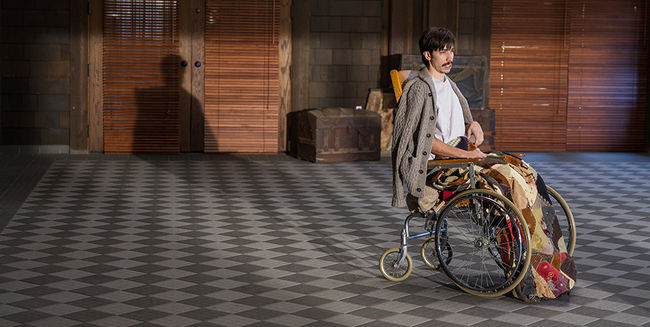 A horror movie from Kevin Smith? Based on one of his smodcasts? About a guy who lures unsuspecting victims to his home in order to turn them into … walruses?

Yup. Tusk is all of those things. And while the premise IS ridiculous, the first two-thirds are actually pretty terrifying, and then it all falls apart thanks to a cameo by a high-profile star who really, really, really loves to wear fake noses and adopt funny accents.

At the start, we meet podcaster Wallace Bryton (Justin Long). Wallace is kind of a douche; his “Not-see Party” podcasts are built around making fun of unfortunate souls on the internet—like a boy who cuts his own leg off with a sword—in which he travels to meet them in person and then comes back home, describing his adventures to his podcasting buddy, Teddy Craft (Haley Joel Osment).

While he’s in Canada in search of something interesting, he notices an intriguing note posted in the bathroom of a local pub and sets off to meet the note-writer, Howard Howe (Michael Parks), in his cavernous mansion to hear all about his tales of travel including his mysterious and tragic friendship with a walrus named Mr. Tusk.

And BAM! From the second Bryton arrives in Howe’s house, you’re on edge. Parks does an amazing job in this role, to the point where his insane Human-Centipede-like scheme actually seems plausible. You can just imagine this guy hiding out, waiting for the perfect victim, and painstakingly constructing a walrus suit made out of human skin and complicated surgical plans in order to recreate the happiest time of his life. * shudder *

It’s when Smith moves the action away from the house that it starts to disintegrate—not that I minded watching the scenes that set the backstory about Wallace’s character at all. In fact, I really enjoyed Genesis Rodriguez’s extended monologue as Wallace’s emotionally tormented girlfriend, Ally. Those bits and pieces chipped away at the suspense, sure. But the most terrifying aspect of the story is lost the second Johhny Depp hits the screen as a Canadian caricature named Guy Lapointe.

The best way I can describe it to you is that when you actually see the completed walrus transformation, you scream (inwardly, of course), “JESUSCHRIST. WHAT IN THE EVERLOVING FUCK IS THAT? THAT IS FUCKING TERRIFYINGLY AWESOME AND HILARIOUS!” and then after a few minutes of Depp, you put your head in your hands and say to yourself, “Jesuschrist. What in the everloving fuck is this? This is ruining the whole terrifying and awesome vibe of the movie.”

And then there’s the ending. OMFG THE EPILOGUE. The ending of the smodcast story is exactly the ending they put on film—so I suppose, for accuracy’s sake, it makes sense. I just wish it had ended about 10 minutes earlier, because the actual ending cements the ridiculousness of the concept. It’s just a smidge too far, even for a movie that is exactly about taking everything too far.