By Amie in Awesome Splattery Things, Splatteriffic Reviews on September 6, 2013
No comments 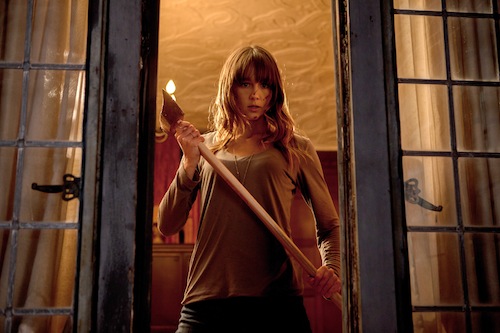 Contrary to its “EVERYTHING ABOUT THIS IS SCARY” trailer, You’re Next is packed with quite a bit of fun. Sure, there are elements of scariness, but the best thing about this splatter-fest is that it’s infused with a lot of clever moments.

For example, taking the basic “trapped in a remote location” horror movie premise, and then flipping it by ignoring not one, but two, of the usual genre tropes: a heroine who actually fights back (think Nancy Thompson, but with professional training), and murderers who aren’t invincible and actually make mistakes.

Director Adam Wingard gathered up his usual crew — Directors Ti West and Joe Swanberg, plus a favorite of all three filmmakers, actor AJ Bowen — and rounded out a perfect cast with the addition of Amy Seimetz (whose role is brief, but memorable) and Re-Animator Scream Queen Barbara Crampton.

The plot itself is pretty thin: the Davison family gathers at their parent’s giant, creaky mansion to celebrate their wedding anniversary when a random group of assailants in animal masks starts attacking them, cutting off access to their cell phone service and sabotaging their cars to ensure they stay put and can’t call for help.

It doesn’t take long before the gore starts, and once it does, it’s pretty relentless. But there’s also a lot of humor in-between the tensest moments, not to mention some nice meta-jokes (my favorite being the convo between Swanberg and West about about documentaries vs. commercials, and what “real” filmmaking is).

I’m not saying it’s flawless — I mean, it’s no Cabin in the Woods (I know, I KNOW. That’s almost an unfair comparison, because WHAT is?) — but You’re Next is nice little ride, and I appreciate that it had a lot of awesome splatteriffic moments. I’m definitely planning to check out some more films by Wingard because of it.

Next up on my favorite horror movies of the decade list - 2012: 🌲🌲🏚 🧟‍♀️🧟🧟‍♂️ 🪓⛓🔪🦄 🌊🐺 THE CABIN IN THE WOODS Directed by Drew Goddard Of all the movies on this list, I have probably watched this one the most. Goddard & Whedon teamed up to create the mother of all meta-horror films and the entire thing fills me with such joy I can’t properly express it. Every viewing, I pause on the elevator scene over and over to try and see as many details on the monsters as possible (psst – all these practical F/X were created by David Leroy Anderson, who is married to Heather Langenkamp!). Also, the entire cast is perfect and it makes me laugh so fucking hard. Watch out for that unicorn! #horrormovies #horrorcomedy #monsters #practicalfx #horrorfx #horrortropes #lists #2012 #decade