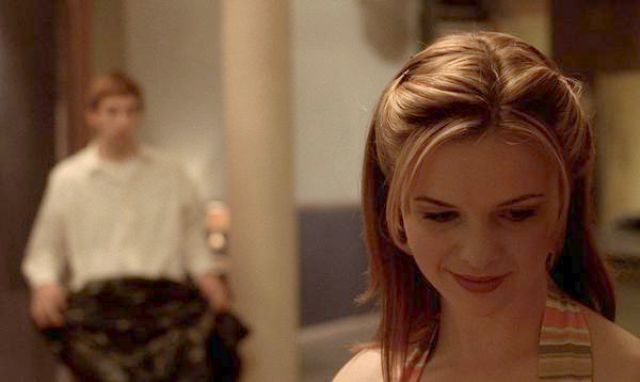 Co-directed by Hatchet’s Adam Green and Joel David Moore (who also starred in Hatchet, and in this film), Spiral is one of those horror films I queued up on streaming Netflix because the trailer intrigued me.

The film focuses on Mason (Moore), a super socially-awkward misfit who seemingly spends his time becoming obsessed with girls and painting them over and over and over…and then, well. Something else.

Mason only has one friend, Berkely, who tries his best to help Mason overcome the trauma of watching his dad murder his mom (yikes) by giving him douchey dating advice.

Enter Amber (Amber Tamblyn), a nerdy but cute girl who somehow thinks Mason is worthy of talking to, and eventually dating. I guess she has a thing for sadsack weirdos, or something. As things progress, Mason ramps up the ook, and Amber starts to think that maybe she’s made a mistake.

I won’t ruin anything by giving away the ending, but it’s presented in a pretty interesting way. Though fans of hard resolution might not dig it…

It’s not terrible, but it’s not great either. Although I have to say that Moore’s performance is pretty awesome, particularly his way of unsettling you and making you feel sorry for him at the same time.

Recommended, even though the splatter is minimal and it’s more creepy, tense “ohmanwhatisgonnahappennext” terror than horror.